Any one of the top three teams on the ice tonight could have won the spring league. In the end after a tense evening of curling Graeme Fisher, Jean Smith, Brian Yeats & Roddy Leslie emerged on top by virtue of having won one more end over the 8 games. Robert Shand, Mark Coutts, Ian McKay & Norma Pratt were runners up. Both teams won 7 and lost only 1. 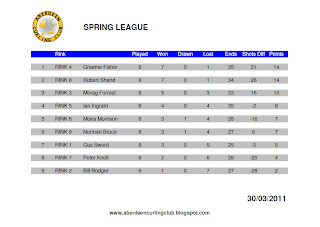 The final league table can be found here.
Posted by Match Secretary at 22:27